Skip to content
011 463 1414kids@bpms.co.za
The netball season officially starts in the 2nd term, although the girls start with practice in February.
Netball for Grade 4 - 7
These four groups of players, namely: U/10, U/11, U/12 and U/13 play in JOMO league. This is the highest league to enter in Johannesburg.  Each age group has an A-team, B-team and C-team.
The U/12A and U/13A can qualify for the Gauteng Netball Championship.
Camps:
Every year the U/9 - U/13 teams attend a netball camp.
This camp is presented by former Protea players from provincial teams.
Gauteng Netball:
Trials will be early in the season and U/12 and U/13 players will be selected to attend District Trials.  Trials that will follow is JOMO trials, Gauteng (1st trails) and Gauteng Final Trails.
Mini-netball for grade 1 - 3
These age groups play mini-netball. They play according to the national and international rules, but for them to learn how to play the game they need to change their positions during every game.

Although these teams do not play league matches, they do take part in friendly matches on sport days and organised tournaments.
The coaching and teaching of the game, as well as ball and movement techniques, are handled by a team of excellent coaches to develop the physical, emotional and intellectual phases of these little ones.
The U/7 and U/8 matches are taking place at Laerskool Unika
Mini Netball Rules

Rotation of players during a match 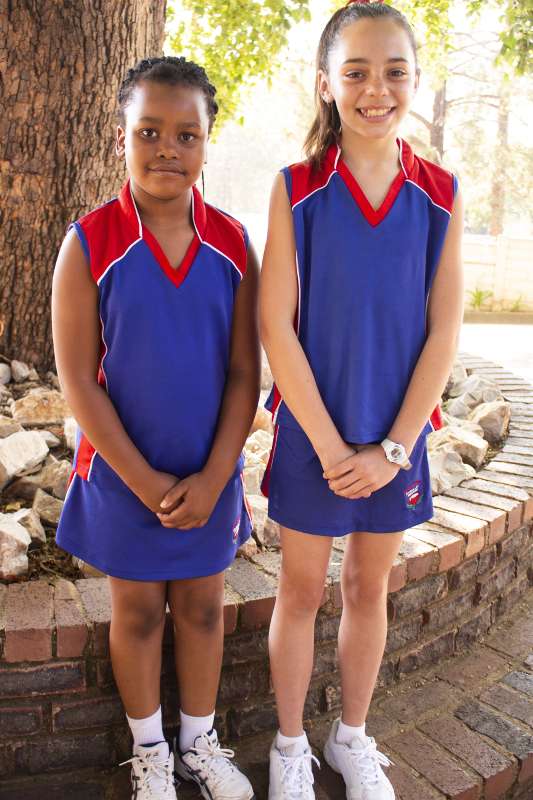 Match Uniform:
Blue skort and blue Bryanston Girls Netball shirt
White socks (not tennis socks)
No jewelry is allowed (this includes earrings, watches etc.)
Nails must be short. Hair out of the eyes using a hair band or clips
Suppliers:
Constantia Uitrusters, Malibongwe Drive, Randburg
McCullough & Bothwell, Fourways Crossing
Basic Equipment:
Each player needs her own ball.  A No.5 ball for U/10 - U/13 and a No.4 ball for the U/7 - U/9 players.
Practice Times and Match Days :
Practice takes place on Tuesday, Wednesday and Thursday.
Matches will take place mainly on Tuesdays and Thursdays but matches are also scheduled for some Wednesdays.

Netball at Bryanston Parallel Medium has an excellent success rate.  Our teams are highly competitive.  Netball is a game that requires speed, good hand-eye co-ordination and excellent footwork.  It also encourages players to work as a team to fulfill the aim of the game:  to get the ball to the goal post for the shooters to score.
To keep a high standard, it is very important that the girls attend their practices.  All the girls are welcome to join netball.  Although we want the girls to enjoy the game and develop their skills, they must also understand that we are part of a league and that we work hard to win our league and therefore we can only choose the best players to play the league matches.
For the past six years, we have had teams winning their league and qualifying for the Gauteng Netball Championships.